Green Homes for All

How Building Green is Changing the Affordable Housing Market

In the middle of São Paulo’s concrete jungle lies an area that was largely forgotten by its 12 million residents for decades. Characterized by abandoned buildings and occupied largely by squatters, the Campos Eliseos neighborhood held only remnants of its early days, when it was occupied by wealthy coffee barons. Today, the neighborhood is changing.

A new segment of the green building movement has a vision that green housing must be for all, especially the poor. Within the neighbourhood’s precarious dwellings, the State of São Paulo government, in a public-private partnership with Canopus, has broken ground on the Julio Prestes social housing project, to provide more than 1,200 apartments for low-income families.

The Julio Prestes social housing project provides more than 1,200 apartments for low-income families. The project, developed by the State of São Paulo in a public-private partnership with Canopus, is contributing to the rapid transformation of the city’s urban core. .

The project is transformational, not only for the city, but also for its people. As a project certified with IFC’s EDGE, the complex will provide much-needed homes for low-income residents. Living in resource-efficient units will also significantly reduce energy and water bills among a population that often spends up to 20 percent of their income on utilities. Depending on the type of unit, residents at Julio Prestes will save up to 26 percent in utility costs.

Adriana Paiano, Chief Architect at Canopus, found that certifying Julio Prestes with EDGE greatly improves the quality of life among low-income residents. “We find that by integrating green efficiencies in our design, we are really making a difference, especially for this market segment,” she said.

A few thousand miles away, the small nation of Haiti also understands how homeownership can change a person’s life. “For us in Haiti, it’s almost revolutionary,” says Patrick Brun, owner of the Chabuma S.A. construction company, “Owning a home is transformative for people.”

Brun represents only one of the developers receiving assistance from Affordable Housing Institute and the World Council of Credit Unions (WOCCU) to build green homes under the Haiti Home Ownership and Mortgage Expansion (HOME) project funded by the US Agency for International Development (USAID). The project hopes to mobilize a private sector-driven approach to financing affordable homes. HOME provides incentives to developers, like Chabuma, to build residences for low-income families, while also working with financial institutions to expand their mortgage portfolios to be more inclusive.

On the outskirts of Port-au-Prince, Village La Fontaine provides a sustainable home for low-income residents. Green features such as the home’s solar panels provide 100% of the energy needs for residents.

“We want the project to be perceived as completely market driven even though it is supported by USAID,” said Olivia Caldwell, lead for HOME from the Affordable Housing Institute and an EDGE Expert, “The idea is that in two years when the project ends, the banks and developers will continue to engage in these activities without us.”

The HOME project has made green affordable housing a reality for Haitian developers in a market where it has never existed before. Brun, who developed EDGE-certified projects Villa Flora and Village la Fontaine under HOME, understood the need for the housing to save energy and water.

In Haiti, the government struggles to provide electricity to its citizens, placing a burden on the poor who cannot afford their own generators when the power goes out. With green features like solar panels, residents can reduce reliance on the electricity grid and take advantage of Haiti’s year-round average of nearly 12 hours of sunlight per day. As Brun says, “Offering affordable homes that aren’t green is just going halfway. You haven’t solved anything.”

Developers in other markets are realizing the potential of resource-efficient affordable homes as well. From the Philippines, where affordable housing developer Imperial Homes Corporation (IHC) saw a 300 percent increase in sales after building green, to South Africa, where International Housing Solutions (IHS) is altering the housing market landscape, the trend is growing.

Each home at the IHC’s Via Verde housing complex in the Philippines has solar panels, allowing residents like Philippine housewife Luzviminda Capin to save a significant amount in her utility bills. “My monthly electricity bill has gone down to only 500 (Philippine Pesos, or about $10). I use the extra savings of 2,000 (Philippine Pesos) to either buy food and groceries, or to pay off the mortgage on the house,” Capin said.

Similarly, in South Africa, IHS properties have introduced innovative technologies such as smart meters to the sector. IHS functions as a financial services provider and partners with real estate developers in South Africa to provide equity financing for properties and to purchase turn-key developments. Its funds have added a large amount of home stock to South Africa’s affordable housing market, many of which have been EDGE-certified. These projects include Waterfall Park, The Village (Clubview) and Candlewood Crescent. 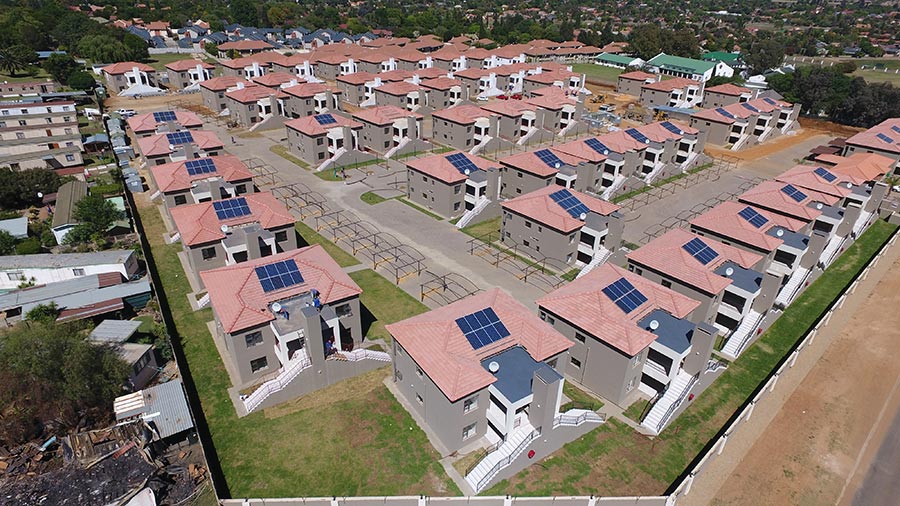 In such nascent green housing markets where building green can be perceived as a luxury instead of a necessity, developers are striving to change the stereotype that green is expensive. In reality, simple alterations to a home’s design, such as adding external shading to keep a home cool, can greatly improve the affordability of homes and reduce utility bills for residents.

Green affordable housing has the potential to change the housing market in countries like Haiti, Brazil and beyond. In Port Au Prince, where many live in overcrowded slums, living in a green affordable home instills a sense of pride. Brun believes that as more of Haiti’s low-income residents move from unsafe shelters to permanent homes, the landscape of the country will begin to change. “Visually, it sheds the perspective that everything in this country is chaotic,” he says, “It changes the panorama of the country by offering affordable homes.”

This article originally appeared in The Ecologist.

About the Author:  Hayley Samu is the Marketing and Communications Specialist for IFC’s EDGE green buildings certification program, which is available in over 140 countries.